8 Famous Guns of the United States

Firearms are a way of life for US citizens. There are enough firearms owned that just about every person in the country has one locked away somewhere. Yet not every gun is the same. There have been several famous guns of the United States that have helped to shape the nation’s history, influence global politics, and make modern life what it is today. Here is a brief look at some of those famous weapons. 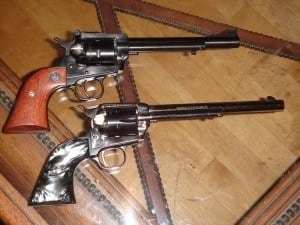 This is the classic “six-shooter” that is talked about in stories of the Wild West in the late 19th century. Samuel Colt had already revolutionized the firearm industry with his reusable revolver, improving the speed and accuracy of soldiers so much that he was taking global orders for this gun. No other weapon of this size has transformed how we think of warfare more than this famous US gun.

This rifle is often called the firearm that helped to win the West. It was primarily used by settlers, homesteaders, and others who were trying to carve out their own life in the untamed wilderness. What made it unique as a rifle was that it fired the exact same ammunition as the Colt revolver. This allowed people to own two very different guns, but only need to stock one type of ammo, and that versatility changed everything. This was a bolt-action rifle that was remarkably accurate for almost any user. It only carried five rounds at a time, but that didn’t reduce the impact a solider could make with this weapon. The US military first introduced this rifle to its troops in World War I. So reliable was this firearm, however, that it remained in use over 50 years later as a sniper rifle during the Vietnam conflict.

During the US Civil War, the southern states were winning victories that they should have never been able to win. This created many larger than life generals who are still celebrated to this day, especially within the old Confederate states. This required the Union troops to have access to a larger than life gun. Once the Spencer repeating rifle was introduced, Union troops could out-fire Confederate troops at a 20:1 ratio on the battlefield since the South was still using muskets. If any one thing changed the course of the war, it was this famous gun.

It can fire 1,500 rounds per minute. Also introduced during World War I, this sub-machine gun is one of the most recognizable firearms in the world today. It’s still one of the most versatile guns that has ever been invented. Is it any wonder that Chicago gangsters would stockpile them? What makes this weapon so dangerous is the fact that virtually anyone can wield it with its minimal kickback. The compact design with a front-trigger magazine is also remarkably easy to load. When you think of assault weapons today, there’s a good chance you’re thinking about the M16 if you’re thinking of a US weapon. It’s the standard weapon of choice for all US armed forces right now. Its start in Vietnam wasn’t pretty since it had a reputation for jamming in the middle of combat, but over the years those issues have been ironed out and it has become a flawless weapon used by many around the world. The smallest of the famous guns of the United States, what brings this revolver onto the list is the innovation of its design. Until this firearm was introduced, revolvers were a single action gun. This meant that the shooter had to pull the hammer back every time they wanted to fire the weapon. The .38 Special was the first standard issue double-action firearm, which meant all the shooter had to do was pull the trigger since it did not need to be cocked. People tend to either really love this gun or really hate it. Issued to troops during World War II, the M1 is a semi-automatic rifle that would fire 8 rounds from a standard magazine. It also saw some service during the Korean conflict. Today you’ll still find the M1 being used for parade formations and other symbolic military events thanks to its good balance and weight… and it doesn’t look bad either.

The most famous guns of the United States have redefined how the world looks at conflict, self-defense, and law enforcement. This isn’t a definitive list by any means – if you could add one more famous gun to this list, which one would it be and why?

Mar 12, 2016Jason Hodgson
Where Is the Best Place to Buy a Gun Safe?How to Shoot a Gun Better

Gun Allegiance is reader-supported. When you buy through links on our site, we may earn an affiliate commission. As an Amazon Associate I earn from qualifying purchases.

Our Most Popular Guides What Is the Best Gun Cleaner? Under the Bed Gun Safe Reviews Best Gun Safe For the Money